Published August 1, 2013.
At home in the trees
A recreational tree climb changes pace and perspective 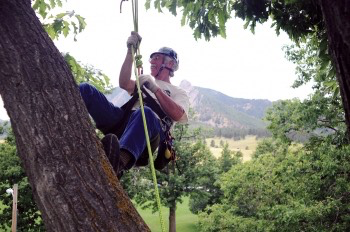 Fifty feet above the ground in one of the Red Oak trees at Chautauqua Park, I’m dangling like a spider suspended from its silk. I pant, grunt and pull myself up another foot, and I’m only half way to the top of the tree. Suddenly, the other rope next to me goes taut and I hear a rhythmic grunting and clanking below.

Another harnessed-up, helmet-clad climber has begun to ascend the tree. In a burst of energy and force, he pushes off the main rope wrapped around his boot, pulls himself farther up the rope a whole foot or two. He does it with such force that the carabiners on his harness clank together with each jump. He grunts and repeats until he reaches my altitude in what seems like a moment. I can’t outpace him, but I also can’t get out of his way. I can’t go back down either because he hasn’t taught me how to get out of the tree yet.
Harv Teitelbaum, the man climbing the other line, flashes a smile as he passes me up the tree, pulling himself up the rope with each grunt, pull and clank. It’s all technique, he tells me. His helmet reads “Ponderosa,” his tree name. Teitelbaum, a master instructor, and yearling tree climbing facilitator Nicole Olalla invited me to join them on a rare public climb in Boulder. My climbing name might as well be “Fish,” because on my first climb, I just hang on the line and flail.

As a master instructor with more than a decade of experience, Teitelbaum climbs lots of trees. There are many people who climb trees in Boulder. Some are foresters who climb tree trunks to prune branches reaching too close to a window. Urban harvesters in town aren’t afraid to go out on a limb and inspect the farthest-reaching branches of fruit-bearing trees. On any given weekend, the public parks host kids of any age squealing and swinging from low-hanging branches.

But, there are only a few tree climbers like Teitelbaum, who are not so much climbers as arborists. Sometimes they won’t even climb a tree. It’s just being around trees that important, Teitelbaum says. These are people so well acquainted with trees that they know them like people. Their trees have names like Gramps, Old Scratchy and Barkley, and they have personalities. Teitelbaum and Olalla know the ones that are the most friendly and the ones who play hard to get.

“Some days, a tree just doesn’t want to be climbed,” Teitelbaum says. “You have to treat the tree like it’s a fine woman, and you kind of have to romance the tree for next time. Just spend some time with it, be nice to the tree, and buy it gifts before it’ll let you climb it.”

Recreational inch worming
Even when you find an agreeable tree to climb, there’s not a lot of climbing on the tree. You climb a rope wrapped around the top branches, in a crotch of the tree — Teitelbaum calls these bifurcated junctions crotches. These static arborist ropes, made exclusively for climbing trees, are less stretchy than dynamic rock climbing ropes. The harnesses are also unique, and they’re actually called saddles. It’s like a rock climbing harness and accurately compares to wearing a diaper, but the bulky pads on your hamstrings make sitting on the line and enjoying the view extremely comfortable.

What keeps you from dropping to the ground are two knots: the Magic Knot and the Red Knot. Above your helmet is the Magic Knot — because it’s the knot that lets you defy gravity, Teitelbaum says. It’s a friction knot that locks from your own weight. Loosen the knot and you can cinch it upward to climb. At your feet is the Red Knot — because the rope’s red, Teitelbaum says. It’s a thinner rope tied into two rabbit-ear loops for your feet. Slide the Red Knot from your feet up to your waist, stand in the loops taking your weight off the Magic Knot, cinch up the Magic Knot, sit, let the top knot tighten and repeat, and advance only a foot or two with each effort. You’re really rope inch worming, but an event called “recreational inch worming” probably wouldn’t attract too many members. Not many people attend when it’s called tree climbing.

Teitelbaum says he’s probably taken a thousand people or more up the trees in Colorado, and this year is on pace to be the largest year yet. Simple, intuitive and relaxing, tree climbing is to rock climbing as flatwater kayaking is to white-water kayaking. And if you ride a fixie, ski tele or longboard, you may already see the appeal. It’s minimal. It gives the climber a sense of being unhindered by anything and everything. Teitelbaum calls this sensation of tranquility and calm “tree time.” Being in the tree literally changes your perspective on the world. Anything in the tree, even watching the traffic go down Baseline Road, becomes fascinating, and I stare at the unaware motorists for minutes. Were I the one driving, I wouldn’t even think of looking up in the trees for us. Before today, I’ve never seen someone recreationally tree climbing.

You can find a climbable tree in all 50 states, but not enough registered instructors/facilitators to fill the country to climb in all of those states at the same time. According to the Global Organization of Tree Climbers, an international non-profit that sets safety standards and practices for recreational tree climbing, there are 39 such enthusiasts in the U.S. and six of them live west of the Mississippi River, including Teitelbaum. Recreational tree climbing originated in Georgia in the 1980s. Today, the majority of tree climbers reside in the South and the East Coast.

Tree climbing instructors are scarce in the West in part because it’s easier to get a minister’s license in Colorado than to be an ordained tree climbing instructor. You have to be invited to train as an instructor, and if you might be into tree climbing for the wrong reasons, instructors such as Teitelbaum will not train you. Even if people are willing to pay to for the lesson and the hundreds of dollars worth of equipment, Teitelbaum has no qualms about refusing to train them if their ideals don’t align. 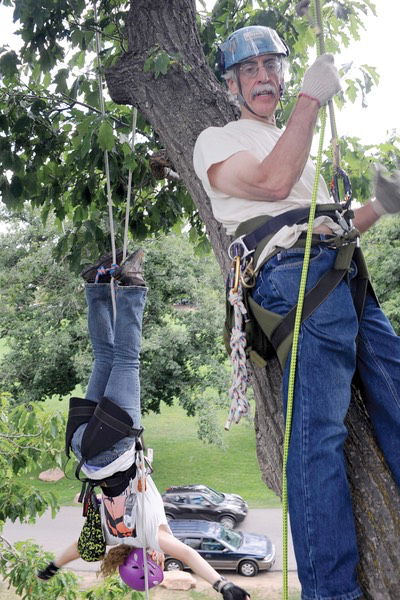 Specifically, he’s wary of the peakbagging mentality of a 14er climber spreading to the trees or anyone who doesn’t show trees the proper respect. And putting slack in the rope to stand on the tallest branch and become taller than the tree irks the traditionalist tree climbers.

“A lot of people do it and I’ve done it myself, actually, but you know I don’t really want to think I should be bigger than the tree. I don’t want to be superior to the tree,” he says. “You always want to have respect for the tree. You never want to try to dominate it.”

If you haven’t heard of this slow growing sport, it’s in part because climbers like Teitelbaum share a natural aversion to the bureaucratic red tape necessary to hold instructional climbs. He does work with a handful of city and county partners across in the Front Range. But he says climbing in Boulder has become more difficult, since he has been restricted from climbing on weekends. In response, Jennifer Bray, a spokesperson for the city of Boulder, said groups with commercial permits are not allowed in neighborhood parks on the weekends, regardless if it’s for a bootcamp, jump roping or tree climbing classes. She adds that Parks and Recreation staff also check and approve the trees suited for this activity, and not one of the trees climbed on in Boulder have suffered any damage from Teitelbaum’s climbs.

Vivienne Jannatpour, a spokesperson for Boulder County Parks and Open Space, says that she has never heard this type of request before. Anyone is allowed to free climb from tree branches in Open Spaces, she says, but recreational tree climbing with ropes and saddles would fall into a grey area based on the impact it’ll have on trees, the landscape and other open space users.

“The natural evolution of rules and regulations is that they get more restrictive as time goes by; although, I deal with some really great people in Boulder forestry,” Teitelbaum says. “I didn’t climb in Boulder for several years, but that’s just me. I have a low tolerance for bureaucracy.”

Down to Earth
While climbing up the tree is a workout itself, going down was fast, simple and easy. We rappelled down and my sneakers touched grass in no time, and snap. I was out of tree time. What felt like only 30 minutes in tree time was actually two hours in real life.
“You know, people change when they’re in a tree,” Olalla says. “I don’t want to sound too New Agey, but it feels like we’re brothers and sisters up here.”

The day I climbed, it was a small family. Only one other person besides me showed up that day, out of the dozen or so who said they would attend. This is an abnormally low day, the two say.
First-time climbers sometimes have a powerful emotional response after rappelling down, Olalla says. After facilitating a climb in Chile, a fellow climber wept in her arms after she descended the tree, she was so overcome with emotion. And while I walked back to the car, I felt like I was leaving the trees instead of returning to solid ground, and I still look for that specific tree when passing Chautauqua Park.

“At home in the trees” by Stephen Kasica